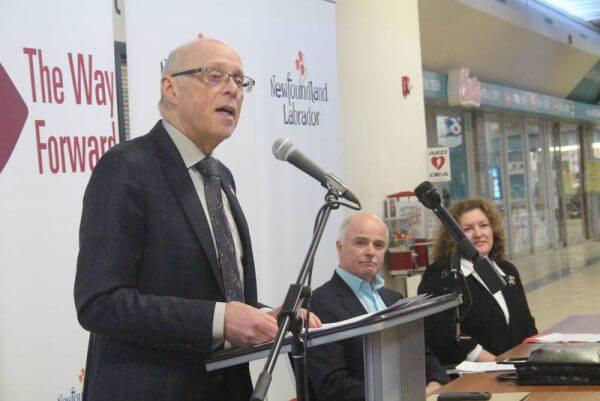 Moving towards digital
GANDER, N.L. — An easier way to use online government services is welcome news to Craig Hall.
The Gander resident already uses online services to renew the registration of five different pieces of equipment and his driver’s licence. He also applies for big-game licenses online.

The MyGovNL pilot project was well received by Gander residents attending the announcement. – Adam Randell
“Almost every second month I’ve got something up for renewal,” he said.

Each service requires different accounts and different access points. While he’s used to the navigation process, he says it can be a difficult process for the first-time user.

The provincial government unrolled a MyGovNL pilot project for the motor registration division to make access to online services smoother on March 27 in Gander.

The digital-by-design format, which is also mobile friendly, provides users – through the use of a single account – access to government services on one website. Users can also monitor dates and receive alerts through this format. They will also be able to review a history of interaction and create a profile to view and manage their information.

Under the Digital Way Forward five-year plan, which was announced in August 2018, MyGovNL will build towards introducing other government services. Currently, there are 43 online services.

The pilot is being made available to 5,000 residents with access increasing up to 10,000 per month starting in May.

Gander resident Ralph Miller has been using online services for some time as well.

“I’m getting up in years myself, I’ve got five passwords to try and keep straight now,” he said. “To get this under the one pot cover, as they say, it will make things easier, so I see advantages to it.”

He sees positive implications for rural communities and a reduction in office wait times.

“For outlying areas, it saves a trip into Gander,” he said.

Service NL Minister Sherry Gambin-Walsh said the comments of the two Gander residents speak in large to what’s been heard around the province.

“People want access to be able to renew their driver’s (licence) and registration any hour of the day, seven days a week,” she said. “People live very busy lives…”

Bringing a shift to digital, Gambin-Walsh sees it as an enhancement of office services.

“What this is going to do, is free up employees to be able to work more effectively and efficiently on services that are not available online,” she said.

But it’s something people have to use for it to be effective.

Gambin-Walsh agrees not everyone is technically inclined but says computers are being set up in government service offices to help with the navigation process.

“If you’re not comfortable using the system, you can come in and get assistance,” she said. “There are 131,000 email addresses already in the system, that’s a clear indication that the general population as a whole want to move towards this system.”

Naspers plans to spin off its Tencent stake and other holdings