A New Exhibition in Boston on Gender-Bending Fashion Is Also About Youthquakes, New and Old 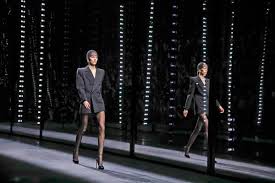 “Gender Bending Fashion”
Tuxedo was worn by Marlene Dietrich in the film Morocco, 1930. “Gender Bending Fashion” at the Museum of Fine Arts, Boston is the rare fashion exhibition that addresses a vital, of-the-moment cultural discussion while at the same time placing it within a historical framework. Gender and identity are subjects that are affecting government policies as well as fashion. And change is happening fast: It wasn’t that long ago that the murse (or man purse) transitioned from a sort of joked-about accessory to a serious revenue maker. Similarly, today the mention of men in skirts extends beyond the visual of David Beckham in a sarong and describes what’s happening on the ground. (Looking for proof? Check out our street style galleries.)

Defining identity on a spectrum rather than along binary lines is a paradigm shift that goes hand in hand with new modes of self-presentation. Leading the way in the industry are designers like Virgil Abloh and Alessandro Michele whose designs resonate with the real pioneers of this sea change, the millennials and Gen Z kids who embrace fluidity. According to Michelle Finamore, Penny Vinik Curator of Fashion Arts at the Museum of Fine Arts, it’s always been thus. “Historically, when you go back to other moments in time when there’s been gender-bending happening, it is in moments of youth-driven cultures—so the 1920s and 1960s and 1970s. Those are the key historical moments when people have been pushing against the status quo.”

The curator tried to look at fashion history through different perspectives, not just via a designer-focused lens and the result is a multilayered show that brings past and presents together in innovative ways. A digital album, for example, introduces contemporary gender-bending Bostonians, while subcultures like Teddy Girls and Pachucas (zoot suit–wearing Mexican-American women of the 1940s), who have traditionally been outside of the conversation, are given space. “We really did try to get across that it’s stories and narratives that bring the objects to life,” says the curator. Finamore makes a point of introducing lesser-known boundary-pushers like Dr Mary Edwards Walker (a pants-wearing Civil War surgeon who once said, “I don’t wear men’s clothes. I wear my clothes.”) among more familiar brands (Gucci, Comme des Garçons) and faces (Dietrich, Bowie). “One thing that we came across when we had these interviews and discussions,” observes the curator, “is that people really look to those icons in terms of how free they felt expressing their own style.” As the Thin White Duke sang, “We can be heroes.”

Here, a curatorial point of view on “Gender Bending Fashion.”

Why is gender-bending fashion gaining traction now?
Historically, when you go back to other moments in time when there’s been gender-bending happening, it is in moments of youth-driven cultures—so the 1920s and 1960s and 1970s. Those are the key historical moments when people have been pushing against the status quo. I feel like there is a lot more freedom of expression right now that is really driven by millennials and Gen Z. They’re finding their communities via social media and they have a platform to express themselves and be more comfortable with expressing themselves, no matter where they’re coming from. I think that has completely changed the game in terms of [them] feeling comfortable in their own skin and getting out there into the world.