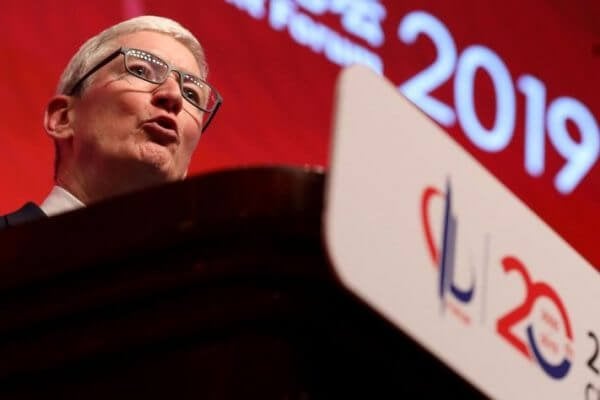 The reason? It lacks a sustainable competitive advantage — what Apple shareholder, Warren Buffett, famously called a moat — in services. (I have no financial interest in the securities mentioned in this post).

Before getting into that, let’s look at Apple’s growth problem. For the three months ending December 31, Apple sales declined 5% to $84.3 billion, according to Apple’s quarterly report, which revealed for the last time — since Apple will stop reporting revenue by product — Apple’s plunging iPhone revenues down a whopping 15% to $52 billion.

To fix it, Apple is taking a different course — betting on services — which grew 10% in the latest quarter to $10 .9 billion – rather than hardware. In the past, Apple grew by targeting a large hardware market with a much better product. Apple succeeded with this strategy with the iPod (MP3 players), iPhone (cell phones), and iPad (tablets).

Apple earned huge profit margins on the hardware and very little on the killer apps it assembled through partnerships that made consumers eager to buy the hardware. For example, its iTunes store shared much of the revenue from licensing music with the company that produced the content and kept enough of the revenue to cover Apple’s costs.

To keep growing, the company has been trying to sell its existing device owners services such as Apple Music subscriptions, iCloud storage and AppleCare warranties, according to Bloomberg.

On March 25 Apple announced new services — TV, news, gaming and credit card services — in a bid to boost revenues, according to the Wall Street Journal.

Its TV app will make its original programming available on hardware from many suppliers. Through partnerships with Oprah Winfrey, Steven Spielberg, Jennifer Aniston and Reese Witherspoon – Apple’s content will be accessible on smart TV devices from Samsung, LG, Vizio, Roku, Sony and Amazon, according to the Journal.

Its other offerings were similarly ho-hum:

Apple News+ will be a premium news service priced at $9.99 a month including the Wall Street Journal and over 300 magazines — which will split revenue 50-50 with the publishers. Many publishers found those terms too onerous, according to the Financial Times;
Apple Arcade will offer “more than 100 exclusive games” for an undisclosed price that gamers can play on touch screens. Apple will face off against Google’s Stadia — announced last week — and cloud-based gaming from Amazon and Microsoft which are expected to be announced soon, according to the Financial Times; and
Apple Card will let users make purchases from their iPhone — giving them 2% cash back with no annual charges or late fees — and provide them with ”a physical, titanium card to use in locations where Apple Pay isn’t yet accepted,” according to the Journal.

Investors shrugged — sending Apple stock down 1.2% on March 25. The bullish case for these services is that Apple has 1.4 billion active users on its devices — some of whom may sign up for the new services.

Wedbush Securities thinks that Apple could add 100 million subscriptions to its TV streaming service in the next three to five years yielding between $7 billion and $10 billion in annual revenue, according to the Journal.

But all the services markets into which Apple hopes to expand are loaded with rivals — two of which — Amazon and Netflix — are led by CEOs who are far more skilled than Cook at creating new services that wow consumers.

Jeff Bezos has turned Amazon from an online purveyor of books to a leader in e-commerce, smart speakers, and cloud services as well as a capable contender in digital advertising and video streaming.

Reed Hastings transformed Netflix from a DVD-by-Mail service to a leader in video streaming starting in 2007, the year Apple introduced the iPhone.

Cook — a logistics expert who worked for IBM and Compaq — has yet to demonstrate his ability to invent new products with sufficient scale to drive Apple’s growth.

For Apple to succeed in services, it must offer consumers a huge leap in value over what these rivals provide. To gain a meaningful share of the video streaming, Apple must demonstrate that it can create programming that is at least as compelling as hit shows like HBO’s Game of Thrones and its proposed payment, gaming, and news services must deliver much more benefit to consumers at a lower price than what rivals deliver.

But Apple — which spent $1 billion on content partnerships — is competing against far better-established rivals. For example, Netflix has 139 million subscribers and is expected to spend $15 billion on new shows in 2019 while offering much more content than Apple plans to deliver, according to the Wall Street Journal.

In addition to these rivals, Apple must face AT&T’s HBO and Disney — “which has decades of experience making hit shows and movies,” according to the Journal – and plans to launch its own streaming service later this year.

The Journal reported that Morgan Stanley forecasts Apple will generate more than $22 billion in sales by 2025 from a combined media package of video and music. But it’s unclear how the bank arrived at that estimate.

Why would a customer pay more money for less content? For example, Amazon Prime members pay $119 a year in exchange for free video content and discounted music subscriptions, noted the Journal.

Ever the cheerleader, Cook thinks Apple retains its edge. “Apple innovates like no other company on Earth, and we are not taking our foot off the gas,” he told investors in its January conference call.

I am not sure what that means — but I think the underwhelming, over-priced services Cook announced are unlikely to reverse Apple’s revenue decline.

Apple Services - A Broadside Of 4 Industries