The Rapid Growth Of ‘1:1’ Technology And How It’s Changing The Classroom 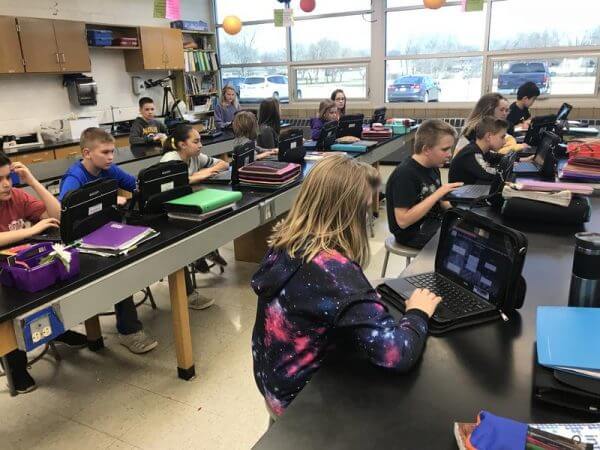 The number of school districts giving laptops and tablets to students has grown exponentially in just a few years. And the new technology is already reshaping the way work is done in the classroom.

That’s already happened at Pecatonica Middle School. The school, in a village of 2,000, went “one-to-one” five years ago. That means one device — in this case, a Chromebook laptop — per student.

As students sit down at their science class, they flip open their laptops. They’ve got a quiz tomorrow, so they immediately go to their Quizlet program to review.

Across the hall, another class fires up their Chromebooks to start working on the “problem of the day.” Next door to them, a math class is working without laptops. That’s increasingly rare, as principal Tim King says around 80 per cent of classes uses the laptops daily.

Starting in 5th grade, students get their Chromebook to use at school and home and keep it through the rest of middle school. Then they’ll trade it in for a new one in high school.

A 2017 survey from the Consortium for School Networking reported 40 per cent of districts in the U.S. were one-to-one. That’s near twice as many as in 2014.

In the same survey, 18 per cent said they had two devices per student.

In northern Illinois, several school districts are in the process of going one-to-one or expanding their programs. Freeport High School, about 16 miles from Pecatonica, is in their first-year one-to-one with Chromebooks.

Although some schools use iPads or other laptops, Chromebooks outpace every other device. Chrome OS made up a reported 60 per cent of K-12 school institutional purchases in 2018. That’s up from 16 per cent in 2013.

A big reason for the breakthrough? Price. At Pecatonica, the investment is $300 per student for four years according to Principal King.

Amanda Lenox is a science teacher at the middle school. She started teaching in 2013, so she’s had access to this sort of tech most of her career.

Lenox particularly enjoys using Google Classroom features where she can embed links and videos in assignments on the fly. She can also use it to quickly leave detailed feedback.

“You can put in a comment for every single one of those questions that they got wrong,” said Lenox. “And so they get almost like real-time feedback; they get it right away and they can look at it and go, ‘Oh that was the kind of answer I needed to have.'”

King also says the Chromebooks help students prepare for state tests, most of which are done digitally.

The school’s technology director, Jeff Bowman, says that was one reason to move to Chromebooks.

“It was kind of the timing was good, because the state was moving the testing over to electronic devices around the time we were doing one-to-one,” he said.

Lenox agrees the Chromebooks help prepare students, and says it allows them to push their students more.

“Where more is given, more is expected,” said Lenox. “So we do excel and we do push our students because they are given more. This is an advantage that some students at some schools don’t have.”

Some research points to one-to-one laptop programs boosting test scores but others are not as convinced yet.

And while some are thrilled by what new technology can bring to the classroom, others worry about the amount of screen time students are getting — especially at younger grade levels.

At Pecatonica, King says it’s something they think about and led them to change other rules, like limiting access to smartphones during the school day.

“If they’re going to have screen time, we’d prefer it to be with our Chromebooks and we have control over it,” said King. “Because we have all of our protections, we have programs, we have a program called GoGuardian that monitors their activity on that. We have a couple of other things we use when they get on Google Hangouts, we’re able to monitor that.”

This also means schools are able to monitor activity while the students are at home. They’re able to block certain sites and some use programs where the school is alerted if students search for certain phrases or keywords.

Amanda Lenox says she likes that even though they are getting a lot of screen time, they’re using the Chromebooks collaboratively.

“When we’re starting a new process and they’re learning new vocabulary, they get in their teams and they talk and they figure out the answers together,” she said. “And as a team, they figure out how to win and move on.”

From one-to-one to smart speakers, to virtual reality — as education moves into the next decade, technology will likely become more and more integrated; and the traditional classroom experience may feel anything but traditional.

What the World Can Teach the US About Education Technology