Will technology save us? Debate fuels pessimism among the audience in Seattle 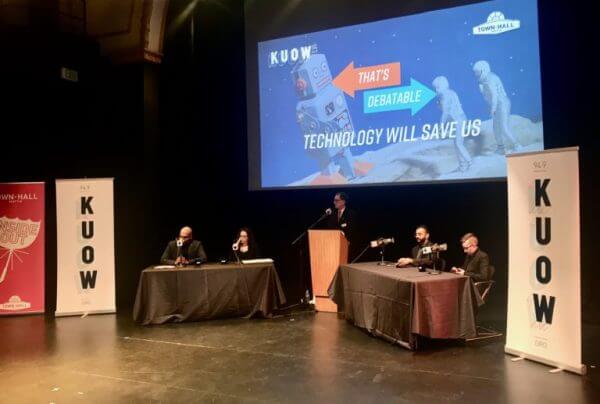 Will technology save us?

That was the opening question Sunday at the latest “That’s Debatable” event in Seattle, hosted by Town Hall Seattle and public radio station KUOW. And what happened over the course of the evening demonstrated just how unsettled we are as a society over the impact of technology on our lives.

At first, the crowd of more than 150 people was split, with a little more than half answering “yes.” But after listening to pro and con arguments from experts in the field, they flipped in a big way. The result: half of the pro-tech crowd defected, with 75 per cent of the audience saying that technology wouldn’t save us.

What changed their minds? Read on to see how each speaker made arguments for either side. Arguing “yes” to the question were Vinay Narayan, vice president of product and operations at HTC VIVE, and Elizabeth Scallon, head of WeWork Labs Northwest, a program for entrepreneurs. Arguing “no” were Amy Webb, a quantitative futurist and founder of Future Today Institute, and Hanson Hosein, director of the University of Washington communication leadership program and president of HRH Media Group.

“There was a time when large countries, large companies had all the technology. They made the decisions because only they could. That’s changed. You can be someone who can barely grasp the English language and you can create applications and programs. You can create things that change lives. That’s where technology is today.

“So if you actually are passionate about climate change, you don’t have to wait for the big companies to do something about it.”

Con: Nobody is in control of technological forces.

Amy Webb: “Though [tech CEOs] have the best intentions for humanity, they are part of a system that is continually under consolidation. And their technology … is torn between the will of our free market economy, the whims of whoever is in office in Washington, D.C., and, ultimately, what’s best for everybody who’s stuck in the middle …

“Companies are prioritizing speed over safety by design. There is no risk modelling. There are downstream implications of decisions being made that nobody is thinking about … A great future isn’t just going to show up fully formed. We have to make difficult decisions. And we have to have the opposite of blind faith because technology isn’t going to save us all. It can’t.”

Pro: Tech is a weapon against our biggest problems.

Elizabeth Scallon: “We could be the generation that creates solutions instead of exasperating these problems. This isn’t hypothetical or wishful thinking. We can actually do this. We have the ability to come together globally to access the knowledge, capital and resources that we need.

“People using technology to solve our most pressing problems means finding practical solutions that can be implemented with a localized approach. For what is technology but a tool. And with any tool, it’s all about how you use it. And because I’m from Seattle, Ani DiFranco sang that song, ‘Every tool is a weapon if you hold it right.’ So let’s use technology as a weapon to fight climate change, poverty, our health crisis and water insecurity.”

Con: Tech has too much power and no transparency.

Hanson Hosein: “This is fundamentally about trust and power. Tech companies have too much power, and we don’t have enough trust in them.

“All it would take for me to [change my mind] is for some more transparency and trust … Facebook’s got over two and a half billion people on their platform. They have more power than most states. And they have zero transparency around their algorithms.”

Point of agreement: Breaking up tech companies isn’t the answer.

Webb dismissed the idea of breaking up major tech companies. “For the record, what [Senator Elizabeth Warren] is proposing is ridiculous, could never work, and puts our national security at risk,” she said.

Her opponent, Vinay Narayan, agreed: “There are many challenges to solve in technology, but breaking up a company isn’t going to solve the problem.”

Do Customers Trust Your Tech? A Look at Technology and Data Protection