WOMAN OF PASSION: Any errand, any time, anywhere 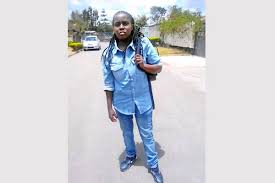 Winnie quit her job at a bank to start a business that offers courier services to employed people working through busy schedules. She speaks to Simon Mburu.

Winnie Lijodi had been employed for two years before she ventured into entrepreneurship. Within those two years, she worked for two different companies. “My first employer was a branding and printing firm based in Westlands, Nairobi,” says Winnie, who is in her early thirties. She worked for one year and would take home 15,000 per month.

In early 2016, she got another job at a local bank. She was employed at Kenya Commercial Bank under contractual terms with a monthly retainer pay of Sh25,000. Although her new salary was slightly higher than what she had been earning at the printing firm, it was still little in comparison to what some of her peers were making in the corporate world.

The highly accelerated cost of living in Nairobi did not make things any easier to bear. But whichever way she looked at it, working at the bank was akin to a dream come true. “It was an opportunity that I could have sacrificed a higher pay for. I was convinced that it would launch me onto a host of bigger and lucrative opportunities in the banking sector,” she says.

By the end of 2016, Winnie began to have a change of heart. First, her contractual terms were not improving at the same speed that she might have hoped for. And over the two-year period that she had been in employment, Winnie had begun to develop a love for entrepreneurship. She says it all started with an observation.

“I saw a gap in the way offices carried out their day to day errands,” she says. For example, says Winnie, she observed that most people in employment struggled to juggle between office and shopping hours. Also, deep down, Winnie longed for the day she would be her own boss and be able to manage her own time and create her own rules of engagement.

Before she quit her job to venture into business, Winnie says she began conducting interviews to identify the exact problems that her venture would create solutions for. “The interviews vindicated my observation. Many of those I talked to confessed how they found it hard getting time off their work schedules to run small errands such as shopping, picking a parcel at the bus stage, or even going to the market,” she says.

In early 2017, she decided to terminate her banking job contract and start her own business. “I developed my business idea from observation, and interviews and then began an actual errands start-up,” she says. She called her business Run For You Errands.

Today, the business offers courier services to employed people working through busy schedules. “My target clients are in the employment field. The business runs errands such as shopping, picking clothes from dry cleaners, cleaning, delivering mails, and applying for government services such as driving licences,” she says.

Interestingly, Winnie says that starting the business did not require a heavy capital investment. In fact, she started it with Sh1,000. “I started with Sh1,000, which I pulled out of my savings. I used the money to buy a delivery bag, delivery book, and a notebook,” she says.

But attracting income was not as easy as she had imagined. “I faced the major hurdle of building trust and a recurrent client base. For a start, I had ventured into a field that touched on the sensitive and personal aspects of people,” she says. It took time for her to start getting return customers. One referral at a time, she began to get some income.

She adds that late payments from some customers who did not hold her business in high regard were also a challenge. “I was new in the field and some customers tended to ignore making payments. They felt that perhaps the money was not so urgent and, or tended to look down on my hustle,” she says.

This compounded matters for her. On one hand, she wanted money to keep her start-up going. On the other hand, she did not want to lose any of her early clients. “Fortunately, I had developed good customer relation skills at my previous jobs. They came in handy as I approached my customers and made them realise why they had to make their payments on time,” she says. Winnie was so convincing that she did not lose the majority of her later payers.

It is now two years since she started her business. “I feel humbled that there are customers who have remained loyal to my business from the first service I offered them two years ago,” she says.

Nonetheless, her venture has not been entirely immune to losses. She adds that there are times when she had contemplated closing the business and making a return to employment. “There were times early on when things weren’t working. Money wasn’t coming through, and I considered closing down,” she says. But intermittent calls to duty by her clients kept her going.

Since she runs the business alone, Winnie says navigating through Nairobi’s heavy traffic has been a key challenge. “There are times when my services have been delayed by heavy traffic. This does not always sit well with clients,” she says. But looking back, Winnie says she has learned there is nothing that can stop a determined mind from cracking through a business.

“I have learned that birthing and nurturing a business requires heavy doses of patience and passion,” she says. “It is not always about capital, but the determination to hold on until money starts to come through,” she says. Over the next five years, Winnie says she is aiming to establish a formal office with adequate delivery machinery such as motorbikes. “My client base is growing and with proper business management, I am confident that I will get there,” she says.