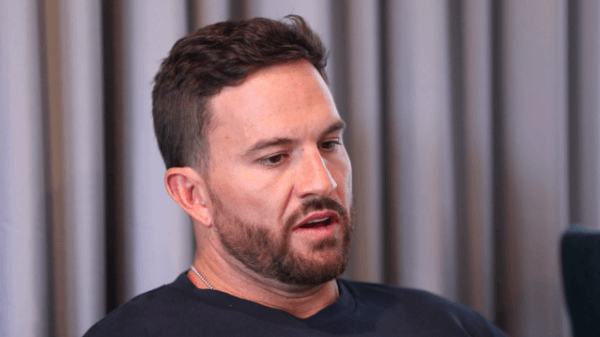 Married At First Sight star Dan Webb has confirmed he and co-star Jessika Power have split, revealing, “the feeling is regret about ever meeting Jess”.

In a sit-down filmed interview (watch below) obtained exclusively by Yahoo Lifestyle Australia, the 35-year-old father of one says he broke up with his co-star after their heated exchange on Talking Married on Monday night, following the MAFS finale which saw Dan discover Jess’ previous flirty proposition towards Nic Jovanovic.

“I and Jess have split, let’s get that straight. We have broken up,” says Dan.

Visibly emotional, the reality star admits “I had trust issues throughout our relationship”, and rewatching the finale footage brought back a lot of emotions.

“It was quite a stressful night actually,” he explains, referring to Monday night. “Seeing all that back, played back on TV, just brought back the first reason why I broke up with her at the start.”

On Monday night viewers saw Jessika and Dan have a tiff on live television during a Talking Married interview, with Dan asking Jess to admit she’d made a move on Nic during the filming of MAFS.

“So [on] Talking Married, we had a conversation on air. It was life,” Dan now explains.

“But basically that conversation was me, I just wanted to get to the bottom of the whole situation with her and Nic – if she flirted with him, didn’t flirt with him.

“There are rumours about her hooking up with him in an elevator. I’m hearing it happened, but I just want to hear her tell me her side. I wanted to feel like she could trust me and the person I was giving her. I was giving her as much as I could give her.”

“So after Talking Married, as soon as the cameras cut, Jess stormed off. She was pretty broken. She was very upset,” he says.

“After that night we went back into the room. She was crying and on the phone to some family members. Honestly, I felt sorry for her. I really did, I was like, ‘S**t I didn’t want this to happen’.

“I wasn’t attacking her, I didn’t mean for it to come out that way,” he explains, adding Jess “was crying for a very long time”.

“She was very upset and I was upset too watching her being upset. We just spoke and I was just honest with her. I said, ‘Look I don’t think I can continue this. It’s toxic, you’re not being honest with me. I can’t have a relationship with someone if they’re not honest with me’.”

The reality star says, “trust is my biggest thing when it comes to a relationship and I felt like she wasn’t giving me that. There’s been so much crap talk and she just wasn’t being honest”.

Dan says he’s chosen to speak out because he wants to set the record straight and put this chapter of his life behind him.

“I look back now, and I’m thinking I would’ve given this girl everything of me,” he admits.

“Yeah, I didn’t introduce her to my son and stuff like that because I wasn’t ready, but at that point in time I really did love the girl.”

“You live and learn… I have a lot of regret for some of the decisions I’ve made,” he confesses.

“The feeling is regret about ever meeting Jess.”

Unhealthy changes in lifestyle must be countered: Experts