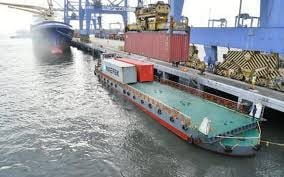 The terminal operator DP World Cochin said that the commencement of the barge service is an essential step towards decongestion of roads and providing an alternate and efficient mode of transport for the Exim and domestic trade in Kerala. The container terminal at Vallarpadam now distinguishes road, rail, and waterway connectivity by barge.

India‘s extensive inland waterways network has immense potential to be an alternative means of transportation. Leveraging this network will benefit the environment and boost trade in the country by reducing the cost of transportation and increasing market access for customers.

ICTT at Vallarpadam has received the third service, and the promoters of the barge service have plans to do it a daily service soon from the current voyage of every three days. A regular service between ICTT Cochin and Kottayam Port & ICD is expected to benefit the importers and exporters through reduced haulage for the last and first-mile connectivity. The cost of movement by waterways is likely to be 30-40 percent cheaper than road movement. Maersk has taken the lead in using the barge service for the training of imported newsprint to Kottayam.

According to port officials, the barge service will help reduce carbon footprint and cost for first and last-mile connectivity, thereby fulfilling the objective of the Sagarmala program of the Shipping Ministry.