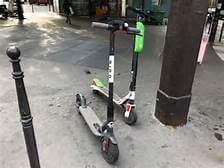 According to the City of Paris, there are 15,000 free-floating vehicles of all forms and shapes in the city, from electric scooters to fluorescent bikes and motorcycle-like scooters. And the City of Paris announced today that companies that operate free-floating services would have to pay a tax depending on the size of their fleet.

Paris is a tiny city — it’s smaller than San Francisco when it comes to the geographical footprint. And it’s also impossible to park a car and drive in Paris. That’s why a vast majority of people who live in Paris don’t own a car. It’s just much faster and cheaper to use the subway or other transportation methods.

That’s why bikes, scooters and motorcycle scooters are thriving. Having fewer cars on the road is a great thing, but it has created some unexpected challenges.

Bike-sharing services thrived when the city’s bike-sharing system was more or less useless during a network upgrade. GoBee Bike, bike, Ofo and Mobile all launched their services in the streets of Paris. But they’ve all failed. GoBee Bike shut down, Ofo still has a few bikes but no team, Mobile is scaling back international operations…

That was a bad start for free-floating services, as many broken bikes are littering the streets of Paris. The dock-based bike-sharing system Vélib is now working, fine with more than 1,200 stations and tens of thousands of rides per day — you basically see them everywhere.

On the scooter front, there are now nine companies operating in Paris. Yes, you read that number correctly. They all have funny-sounding names too — Lime, Bird, Bolt,  Wind, Tier, Voi,  Flash, Hive and Dott.

They’re quite popular because there are a ton of bike lanes in Paris. Most people still don’t wear helmets, and there are a lot of injuries — but that’s another issue.

Like many other cities, many people complain about scooters crowding the sidewalk. If you’re in a wheelchair, pushing a stroller or if you’re visually impaired, navigating the street can be difficult these days.

The City of Paris wants to make those companies accountable. They need to take care of their fleets to maximize the number of scooters that work and remove the broken motorcycles. And I’m sure there will be some consolidation and bankruptcies in the space.

When it comes to motorcycle scooters, Cityscoot and Coup have been putting more scooters on the road. There’s no reason they would be excluded from the tax. Sometimes, they are cluttering bike parking space, for instance:

Let’s see if that strategy works to avoid a dumping approach. Free-floating services have a significant impact on the environment. Scooters only last a few weeks before they need to be replaced. The solution isn’t to throw more scooters at the problem.