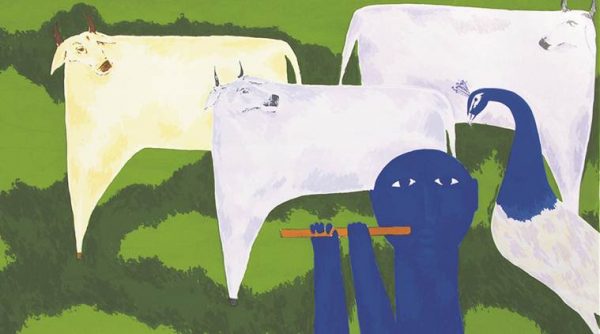 Kachru recalls how Shah travelled to Tamil Nadu, while at NID, to work with potters and villagers who made terracotta horses for their guardian deity, Ayannar. He had a group of the life-size horses sent to the campus that stand even today.

When former National Crafts Museum director and art and cultural historian Jyotindra Jain joined hands with the veteran artist Haku Shah to co-author the book Temple Tents for Goddesses in Gujarat, India, in German, in 1982, he got a refreshing insight into what it was like to work with his close friend, who passed away last week at the age of 85 in Ahmedabad. As they set about on a journey to chronicle folk deities of Gujarat painted on textile pieces in kalamkari style, which was created by the Vaghari community for the scheduled caste, they captured the many dyes used for the process, and the sacrifices, mythology and rituals attached to them. These textiles, many of them 10 to 15 feet tall, were soon used by some of the scheduled caste communities to create tent-like temporary enclosures to invoke their goddess.

“Coming from an academic background, I was a trained scholar and anthropologist but Shah’s rapport with the craftsmen and folk artists was interesting. His affection and relationship with them was wonderful and his insights were different,” says Jain. He recalls his first day at the National Crafts Museum, Delhi. He was greeted by the exhibition “Mati Tere Roop Anek” in 1984, curated by Shah, on Indian terracotta and pottery, with live demonstrations by potters, not only from Gujarat but across the country, at the only gallery back then. “This included a lot of Indian terracotta works made for rituals that were offered to shrines in tribal areas. Surat-born Haku gave us a potter’s understanding of making a form, through his drawings of a horse’s four legs, torso and neck, which would be assembled later,” says Jain.
Trained in arts at MS University of Baroda, Shah set up a tribal museum at Gujarat Vidyapith in the 1970s. His exhibition “Ritual Art in Tribe and Village — Art of Unknown India in the US” at the Philadelphia Museum of Art, after being invited by art critic
Stella Kramrisch made his intentions of highlighting India’s rich heritage of traditional art and craft.

Tanishka Kachru, a professor of visual communication at National Institute of Design (NID), where Shah worked as a researcher during the 1960s and went on to serve as a visiting faculty member, shares similar thoughts. As she put together the exhibition “Votive Terracotta of India: The Scholarly Work of Haku Shah” at their Ahmedabad campus last month, little did she know it would serve as a gateway into the Padma Shri artist’s journey. She used Shah’s field notes from his research trips, his photographs, including those of votive terracotta horses, made in the Poshina village of Gujarat, and his personal collection of artefacts. “He portrayed how objects of every day, like pots and bowls made by village potters, could not only be useful at home but also serve as ritual items. How the everyday and spiritual aspect came together was a key part of his works, just like his paintings. Similar to how a craftsman or a potter would work. Shah’s subjects kept recurring in his paintings, in his Krishna, cows and women.”

Kachru recalls how Shah travelled to Tamil Nadu, while at NID, to work with potters and villagers who made terracotta horses for their guardian deity, Ayannar. He had a group of the life-size horses sent to the campus that stand even today.

When Bengaluru’s NGMA hosted the exhibition “Nitya Gandhi: Living ReLiving Gandhi”, in 2015, comprising seminal paintings by Shah, it gave glimpses of the Mahatma picking up salt with his wife Kasturba, spinning his charkha, and his three monkeys. It brought out Shah’s way of life. Artist Manu Parekh, says, “He was a modern painter and Gandhian thought was in his every subject, of man, woman and animal, which was all about simplicity.” His photographer son Parthiv Shah agrees, “Gandhi reflected in his colours, in the way he would do his shows, and how he connected with galleries and collectors.”

This art village is working to support an eco-friendly lifestyle