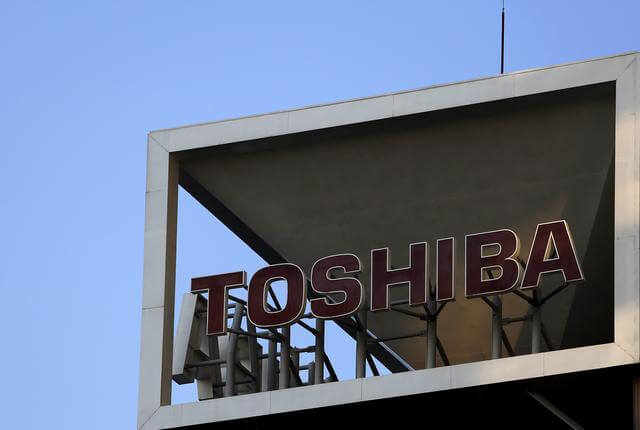 TOKYO (Reuters) – Toshiba Corp shares fell more than 5 percent on Friday after an agreement to offload its U.S. liquefied natural gas (LNG) business collapsed, a blow for the Japanese conglomerate which has been shedding assets to turn around its business.
Toshiba said late on Thursday that China’s ENN Ecological Holdings Co had scrapped an agreement to take over the LNG business due to a failure to get approvals from shareholders and a U.S. panel that monitors foreign investments.

Toshiba must now look for a new buyer for the business that it previously said may cause losses of as much as 1 trillion yen ($9 billion).

Spot LNG prices are trading at about half the level they were when Toshiba agreed to pay ENN more than $800 million to take over its U.S. operations.

A failure to find a buyer could derail Toshiba’s recovery from the fallout of the bankruptcy of its U.S. nuclear power unit Westinghouse, analysts have said.

“The challenge in obtaining U.S. approvals provided an opportunity for ENN to walk away from a deal that will be out of the money in the near term following a collapse in LNG spot prices,” said Saul Kavonic, head of energy research for Australia at Credit Suisse.

“At current LNG spot prices, it will be a challenge to bring U.S. LNG volumes into Asia on a cash cost basis, let alone factoring in an additional processing tariff,” he said.

Toshiba stunned the market in 2013 when it decided to enter the LNG business. With no experience in shipping or the logistics of the gas and LNG business it seemed an odd fit, analysts said at the time.

Toshiba’s plan was to pitch LNG supplies as a sweetener to potential Asian buyers of its turbines used in combined cycle gas-fired power plants.

The company signed up to take 2.2 million tonnes of LNG annually from the Freeport LNG export plant in Texas, construction of which is almost complete.

The arrangement requires Toshiba to pay a processing fee for the LNG, regardless of whether it takes the fuel.

The company has been trying to sell the business since at least 2015.

The Record Business Is Coming Back, But It's Not 1999 Yet