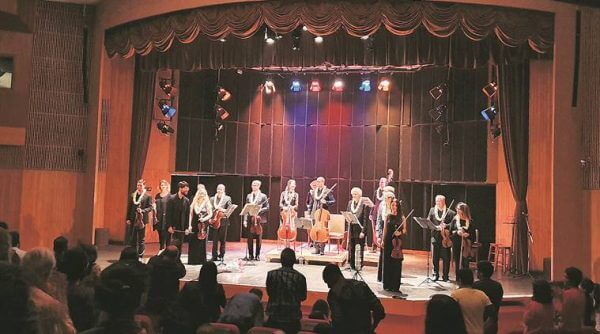 Germany-based Stuttgart Chamber Orchestra presented a concert in Delhi with plenty to admire
The orchestra began with Brahms’ Symphony for Strings No 2 in G Major, one of the most significant pieces by the composer. With clean harmonies, this one had the violins and the violas in conversation with each other.

When Vistaar ended, those present sat in pin-drop silence, with no applause, no sound; just awe and silence.
When Berlin-based composer, poet and researcher Sandeep Bhagwati lost his friend and eminent musicologist Dr Ashok Ranade in 2011, he wrote a series of melodies inspired by the “spontaneous outburst” and called it Alaap for Ashok. A set of poignant melodic patterns, where the strings swelled and musical structures were simple yet inventive, he added more elaborations to it and the piece premiered in India, as Germany’s Stuttgart Chamber Orchestra took to stage at Delhi’s Stein Auditorium last week.

The solemn sadness of the piece that Bhagwati has titled Vistaar (elaboration) was haunting and meditative — a difficult balance to strike in the world of music. It was striking how he spotlighted different sections of the orchestra — the violins, the violas, the cellos — beautifully in the piece. A tender opening led us into more complex string structures with glorious high notes, fascinating bass patterns and superb clarity in resonance and delivery. Ranade would have been extremely proud, and more than that plain overwhelmed by what his friend has managed to achieve.

When Vistaar ended, those present sat in pin-drop silence, with no applause, no sound; just awe and silence — the kind of applause every musician aspires for. Stuttgart Chamber Orchestra and Bhagwati could not have asked for a better response to the premiere of their piece in India. As for the audience, besides this one incident, their responses often were bizarre, especially during the presentation of Bach’s two concertos — Concerto for Two Violins in D minor and Brandenburg Concerto No 3, perhaps the musician’s most well-known works. The pauses between the movements were strangely marked by applause. The musicians consider these pauses sacrosanct. Audiences were appreciating but at the wrong moment.

It seems as if the western music concert etiquette has not really seeped into the Indian consciousness just yet, despite a plethora of western music schools here at this point. But the interest is there. It showed when we saw a long and serpentine queue to listen to 70-year-old and 18-member Stuttgart Chamber Orchestra, one of the finest chamber orchestras in the world, an hour before the concert.

The orchestra began with Brahms’ Symphony for Strings No 2 in G Major, one of the most significant pieces by the composer. With clean harmonies, this one had the violins and the violas in conversation with each other. The delicate labyrinth passages of this “farewell to a friend” piece was never created to be melancholic. In fact, it is bursting with life. The orchestra matched to the work of a master and created an intense piece with the core intact. This was followed by Bach’s three-movement Concerto for Two Violins in D minor composed in 1720. The violin solos, the hallmark of this concerto, came through beautifully.

But what had the audience stand up and cheer was a breezy Bollywood number from the ’90s — Jatin Lalit’s title song from Kuch Kuch Hota Hai. To the orchestra’s credit, it nailed the string-based, straight-notation tune with much gusto. They even got the interlude right as if they play it next to Brahms symphonies on a regular basis. It was populist, of course, and got them a standing ovation. But a concert by the brilliant orchestra like Stuttgart, even in India, needs to be remembered for bringing alive some of the finest music created centuries ago with much precision and panache.