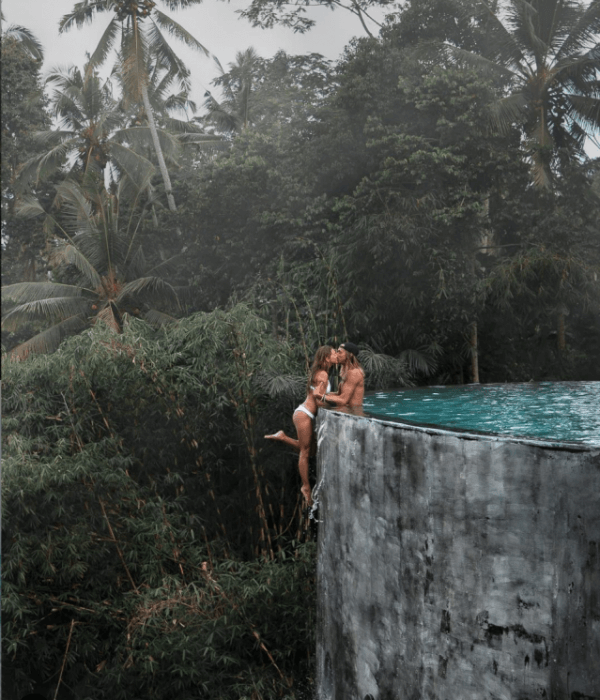 An Instagram couple who posed for a perilous photo in an infinity pool was labelled ‘moronic’ and ‘dangerous’ after posting the dicey shot.

Kelly Castille and Kody Workman, an American couple living in Bali behind the Instagram account @positravelty, make a living off their beachy escapes.

But their latest travels conjured scorn among their 63,000 fans — on April 2, the influencers dipped into an infinity pool at Kayon Jungle Resort in Ubud for a thrilling shoot.

In the shot, Workman, 32, held Castille, 33, over the edge of a three-story pool, her entire bikini-clad body dangling over a mysterious chasm.

The photo was liked almost 19,000 times, but the comments were less positive.

“What a stupid ridiculous photo. When one of you falls and meets your death than we will see if Instagram was worth it idiots,” one commenter wrote.

“Dumbest thing I’ve seen today. Imagine if she fell, all for the sake of a little internet fame,” another added.

“Why is the woman always the one risking themselves for pictures? Never see a guy hanging over a cliff,” one person said.

“You know, other people are gonna start dangling themselves from infinity pools and dangerous like this also to get a shot like this. Way to set an example.”

Castille and Workman did not immediately reply to Yahoo Lifestyle‘s request for comment.

In a joint statement to Fox News on Thursday, the couple said, “As for safety, we are all responsible for ourselves at the end of the day. The reality is that we felt safe, stable and confident for two reasons. First and foremost, there is another pool below that we cropped out of the shot for dramatisation.”

“Secondly, we thought about this photo for days, considering the angles and potentials,” said the couple.

“We are travellers, adventurers and above all, creatives. Life is about perspectives and it is important to review them all. As for the backlash… we know we were safe. A fall would have been nothing more than a nice splash and sprint up the stairs to try it again.”

According to Insider, Castille and Workman met for the first time in May 2018 and have been travelling together since. The theatrical photo, Kody told the website, was Kelly’s idea.

“We had faith in each other and trust to pull this off and so we made the choice as a team to shoot it. There is a lip, where the ridge of the infinity pool juts out over the wall where Kelly could get a solid grip and place her weight on her forearms.

“I held her the entire time and if zoomed you can actually see my grip on her arm.”

“We have both jumped off of waterfalls and bridges much higher than this infinity pool,” Workman added, “so the height aspect wasn’t a concern for us at all.