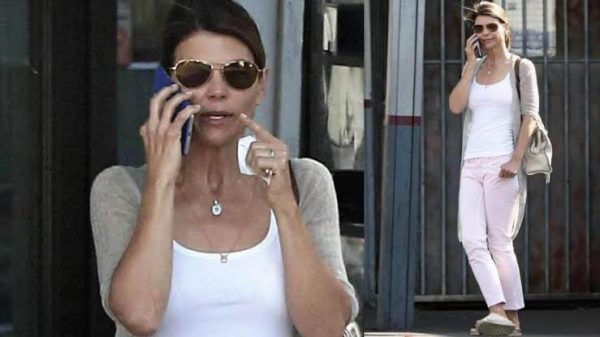 Lori Loughlin was seen out running errands in L.A. just as the U.S. Attorney announced she and her husband were hit with an additional charge in the college admissions scandal.

The “Full House” star was spotted getting her car washed Tuesday in West Hollywood, one day after Felicity Huffman revealed she will be pleading guilty to the charges of mail fraud.

Nipsey Hussle’s Community Protecting the Streets from Counterfeit Merchandise
Nipsey Hussle‘s legacy will long be cherished and protected for years to come, but his image and likeness will also need some protection, so his community has stepped up.

Quality LevelsFullscreen
Keeping it casual in pastel jeans and a white shirt, Loughlin even flashed a grin while on the phone. However, she may not have been notified that the U.S. Attorney announced she and Mossimo Giannulli have been indicted by a federal grand jury in Boston for money laundering.

The Blast reported, Huffman took responsibility for her involvement in the admissions scandal after being charged with one count of conspiracy to commit mail fraud and honest services mail fraud. According to the Massachusetts Department of Justice, she has “agreed to plead guilty pursuant to plea agreements.”

Prosecutors appear to be going hard on the defendants who refused to cut a deal early on, and now Loughlin and her husband may be looking at real prison time if convicted.