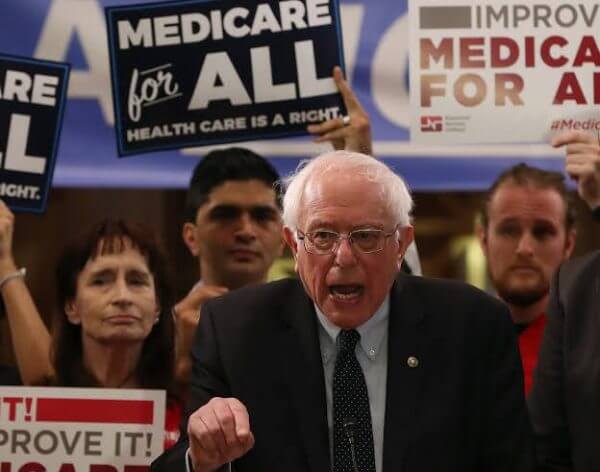 When I look at the Australian health care system, I see something kind of unusual: a hybrid of where the United States is now and where Bernie Sanders wants to take us.

The Australians have a universal coverage scheme that leans more heavily on private insurance than most the other systems we talk about. The country provides a base of public insurance to all citizens but then actively encourages them to take out private plans to supplement their government-run insurance.

The Australian health care system generally gets pretty good marks! You can see that in the most recent Commonwealth Fund rankings of international health care systems. Australia came in second out of the 11 countries included. (The United States, unsurprisingly, came in last.)

Commonwealth Fund
In Australia, all citizens get coverage from a public health insurance plan that covers things like hospital stays, doctor visits, and prescription drugs. The cost of accessing the health care system with public insurance is low: There are no copayments or deductibles for publicly financed hospital visits.

But along with providing public coverage, Australia encourages residents to enrol in a private plan too. A relatively new initiative called Lifetime Health Cover encourages Australians to sign up for private insurance when they’re young — or face higher premiums when they get older (when they’ll likely have greater health care needs). Australians who don’t take out a policy before the age of 31 could face a 2 per cent premium surcharge for each year they go uncovered — in other words, someone who waits until they turn 40 to enrol in private coverage would be paying 20 per cent more than someone who signed up 10 years earlier.

For lower-income Australians, there are public subsidies to lower the price of the public plans, which can range from a few hundred dollars to a few thousand depending on the size of the benefits package and whom it covers.

The private coverage Australians buy can both cover additional benefits, not in the public package and offer faster access to services that are included in the public program. There is evidence that Australians are using their private plans to get faster access to knee replacements, for example and other surgical procedures. Websites for new Australian moms advise that people with private coverage are more likely to get a private room for their postpartum hospital stay than those with the public plan, and more able to choose a doctor.

When I look at Australia’s health care system, I see a system that offers all citizens a basic package of benefits. That’s really different from the United States, where, even after the Affordable Care Act, 27 million Americans still lack coverage. Only about 14 per cent of Australians says they’ve experienced a cost-related barrier to receiving care in the past year. That’s pretty much on par with Canada (where the figure stands at 16 per cent) and much lower than the United States (we’re at 22 per cent).

At the same time, the Australian system seems to retain one of the defining features of the American health care system: the ability to purchase quicker access to coverage. This means that you do see some disparities in health care access between those with private and public coverage. You see this in a recent report from the Australian government, which shows longer wait times for those who use the public plans.

Sydney Morning Herald
This chart is going to read pretty differently to you depending on what you want out of a health care system. If you think everyone should have the exact same access to health care, regardless of income, then you’ll see a lot of problems in this chart. It shows that in Australia, there are disparities between those who carry public coverage and those with private benefits.

But if you’re someone who thinks that as long as everyone has basic coverage, then it’s okay for those who can afford it to purchase extras, then you might be more okay with the results that Australia is producing.

If you look back up at the chart I shared earlier of the Commonwealth Fund’s international health rankings, you’ll see that while Australia gets high marks for its health care system overall, it is further down the list when ranked on equity alone.

In the United States, we’ve become quite accustomed to the idea that having greater wealth means easier access to health benefits. That’s why when I look at the Australian system, I see one that might be a more realistic path forward for us today — one that, for better or worse, retains certain parts of the American health care system while adding a basic level of coverage for everybody.