Did LSU’s Tremont Waters travel on his NCAA tournament game-winner vs. Maryland? 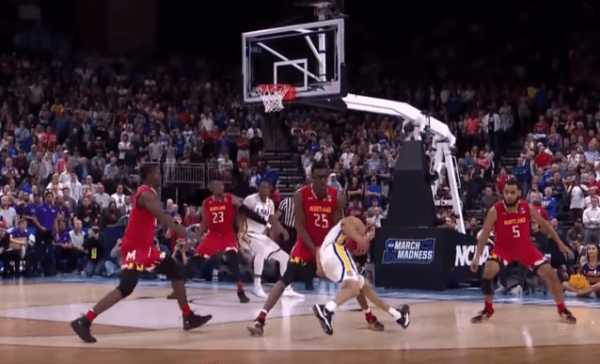 Bitter Maryland fans thought so. Most discarded their complaints as unfounded, the results of a desperate search for blame. But a close look at replay reveals they might have a point.

From CBS’s primary camera angle, there is nothing even remotely suspicious about Waters’ footwork in real-time. So before we get to the technicalities, keep that in mind. It looks like a standard one-step, two-step gathers – not even in the grey area that often goes uncalled in the NBA.

But there are two aspects of Waters’ move that could make it travel.

Did Waters collect the ball too soon?
Waters is allowed two steps after picking up his dribble. The first is the left foot to the right foot. The second is right foot to left foot – off of which Waters elevates toward the rim. It looks perfectly legal.

Now, there is no mention of “two steps” in the NCAA rule book. But traveling, for years, has not been governed by the rule book. Precedent-setting interpretations control it. So maybe, by the book, Waters has to gather the ball mid-step, after he picks up his left, while he’s airborne, rather than when his left foot is on the ground, making it one-and-a-half steps rather than two. But that’s not how traveling is called.

The only actual argument here is whether Waters cradled the ball between his right arm and right side before his left foot hit the ground, making it two-and-a-half steps instead of two. If Waters has picked up his dribble in this screengrab, technically, it’s a walk.

Did Waters drag his right foot?
The aspect of Waters’ move that technically makes it travel is a toe-drag/toe-tap that was almost impossible to pick up in real-time.

A slow-motion replay from the sideline – the final angle in the video above – reveals Waters’ right shoe grazing the floor as he explodes off his left foot toward the basket:

Watch Tremont Waters’ right foot as he explodes off his left toward the basket.
That toe-tap would count as Waters’ third step, making it travel.

But as discussed above, that toe-tap is incredibly difficult for a ref to spot. Hardly anybody noticed it before multiple replays. It also doesn’t give Waters any advantage.

So, long story short, it was travel that can’t and shouldn’t be called. Instead, Waters’ heroics should be recognized as March Madness’ first magical moment, and the shot celebrated for all the other aspects that made it great.

GBP/AUD clings to 1.8600 after RBA, all eyes on UK Sevices PMI, Carney Testimony