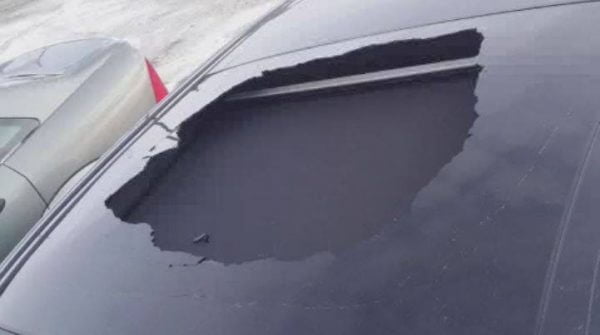 A Toronto driver is looking for answers about why the sunroof of his vehicle seemingly shattered without warning. Sean O’Shea reports.

Jody Winder was walking back from an errand in Milton, Ont., on a mild fall day in 2017, when she discovered a hole in the panoramic sunroof of her brand-new BMW X5. She had just picked up the vehicle from a Toronto dealership less than two weeks earlier.

Part of the sunroof had shattered while the car was parked in a residential driveway in an area clear of objects, trees or other vehicles, she said. There was no trace of anything that could have hit the glass inside the car, she added. And there does not appear to be an audible impact preceding the shattering in a dash cam video Winder provided to Global News.

Winder was flabbergasted and upset — but that was just the beginning of her ordeal, according to her account.

When she called BMW Assist, the car maker’s exclusive emergency service for drivers, she said she was told her vehicle was “driveable.” She would have to take it to the dealership herself for repair the next day.
She didn’t make it back before the rest of the sunroof “exploded,” chipping the paint on the roof, she added.

“It was terrifying,” she added.

So when Winder heard from her Toronto BMW dealership that repairs would not be covered by warranty, she took the matter to BMW Canada itself.

In a letter threatening legal action viewed by Global News, Winder demanded a new replacement vehicle or a complete refund of her $90,000 car purchase. Eventually, BMW agreed to cover the cost of replacing the roof, cleaning up the interior and repairing the roof under “goodwill,” according to Winder.

The whole process took until mid-February as new issues kept popping up, Winder said. When she first picked up her repaired car, for example, she noticed her seatbelt wouldn’t lock because the buckle was still full of glass.

Still, in the end, Winder said she got her luxury SUV back in tip-top shape without paying a penny. And she told Global News she’s happy with how BMW dealt with her case.

BMW Group Canada has not responded to several requests for comment about Winder’s account of the events.

For all her alleged troubles, Winder’s consumer experience could have been worse.

Global News has received several reports from drivers indicating that dealerships and manufacturers blamed the accident on something hitting the roof and dismissed the possibility of manufacturing defects.

Data from Transport Canada shows complaints about shattering overhead glass have grown from zero in 2007 to over 100 in 2016, a number that’s likely growing along with the popularity of ever-larger sunroofs.

Drivers are often left to their own devices, with dealers and manufacturers refusing to pay for damages, usually worth around $1,200, even when the vehicles are under warranty, according to accounts collected by Global News.

Sunroofs usually shatter because of accidental damage, Transport Canada previously told Global News. Even something as small as a pebble can cause tempered glass to explode into tiny pieces, especially if the sunroof has already been subjected to significant stress.

In a smaller number of cases, however, manufacturing defects also play a role. Impurities in the glass, for example, can put additional stress on a sunroof when the crystal expands at higher temperatures. In cases involving issues around the quality of the glass, even leaving your car parked in direct sunlight during the hot season may increase the chance of the sunroof shattering, Chris Davies, head of research and development at Belron, the world’s leading vehicle glass repair company, told Global News in a previous interview.

The trouble, though, is it can be “very difficult” to tell whether a sunroof shattering was caused by external impact or whether a manufacturing issue also played a role, Davies said.

Insurance claims: you may avoid a deductible but will your costs go up?
Mark Barsoum chose to file an insurance claim with Aviva Canada after he was told replacing the shattered sunroof of his 2017 Hyundai Tuscon would not be covered under warranty.

In a pleasant surprise, Barsoum told Global News he did not have to pay a deductible.

That may happen when the claim is paid out under the comprehensive section of the auto insurance policy, according to Anne Marie Thomas of InsuranceHotline.com, an insurance comparisons site. Comprehensive insurance is optional coverage for damage to a vehicle that doesn’t stem from an accident.

Still, some drivers may still be required to pay a deductible for glass repair, even if they have comprehensive coverage, according to ThinkInsure.ca.

And too many comprehensive claims could result in policyholders’ insurance costs going up, Thomas said.

“Nothing is more important to Hyundai than the safety and security of our customers. Hyundai stands behind the quality of our products and this is demonstrated through our long-standing and industry-leading five-year warranty that has benefited many Canadian consumers and continues to be a significant statement of confidence in the quality and safety of our vehicles,” the company said in a written statement.

CAMVAP covers most vehicles up to four years old, offering binding arbitration at no cost. The organization trains independent arbitrators to handle automotive cases. Consumers can ask not just for payment or reimbursement of damages, but that manufacturers buy back defective vehicles, among other things. And the whole process is supposed to take no more than 70 days.

One limitation is that CAMVAP won’t handle cases that have already gone through insurance. But the bigger catch is that arbitrators’ decisions are final — there is no way to appeal.

“If you go that route, you’re not going to have an option to take it to court anymore,” said Omar Ha-Redeye of Fleet Street Law.

Still, overall, the CAMVAP system is “quicker, cheaper and simpler than going through the court system,” he added.

Representation in small claims could cost a few hundred dollars if consumers want to hire a paralegal to help them through the process, which is an option in Ontario, he added. Getting a hearing may take months, and cases may be assigned to arbitrators who nothing about motor vehicle claims, Ha-Redeye said.

Statistics, though, show that very few Canadian drivers are turning to CAMVAP. The organization processed just 206 cases in 2017.

WATCH: An increasing number of drivers has been calling for an investigation into exploding sunroofs, Tony Tighe reports.

 
That may be, in part, because CAMVAP does not have an advertising budget. Another issue is that CAMVAP is funded by the auto industry, which makes some consumers wary.

That, though, isn’t necessarily as suspicious as some Canadians think, Ha-Redeye said.

Vehicle manufacturers bankroll CAMVAP because it’s “cheaper and more effective for them to resolve their disputes through the system,” he said.

 CAMVAP general manager Stephen Moody told Global News that manufacturers are never involved in the selection of arbitrators. And statistics from its annual report show that claims handled by CAMVAP resolved partially or fully in favor of the consumer in nearly 65 percent of cases.

Barsoum, for his part, reached out to CAMVAP but ultimately decided to file an insurance claim to speed up the repair process. He wanted the work done as soon as possible in order to be able to sell the vehicle, he told Global News.

He estimates he’s going to lose around $10,000 on the car but figures that’s the price of peace of mind.

“I’m going to be doing my best to get rid of this vehicle,” he said.