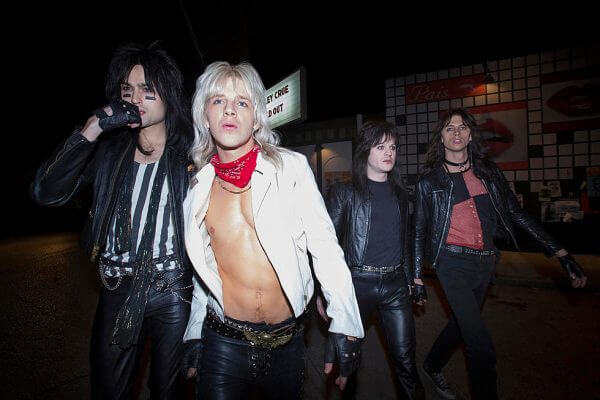 Motley Crue enjoyed a massive explosion of interest in their music catalogue as a result of The Dirt movie, new figures reveal.
A statement reported that the band’s record sales had grown by 2,000 per cent, while the soundtrack album reached No.1 on the iTunes All Genres Chart. It’s also at No. 4 in the U.S. and No.5 globally, with the band’s Greatest Hits compilation at No.2 domestically and No.11 worldwide.

Spotify streams were up from 400,000 per day to 3.6 million and Deezer showed an increase of 669 per cent. Meanwhile, the 2001 book on which The Dirt is based returned to the top of the music biography chart on Amazon.
The movie premiered on March 22 on Netflix. “Early returns show the movie at 85 per cent audience score at Rotten Tomatoes, on par with Bohemian Rhapsody’s 87 per cent and ahead of Black Panther’s 79 per cent,” the statement said.
“It is changing perceptions too, as women are enjoying The Dirt just as much, if not more than men, giving it a higher grade (7.4/10) than their male counterparts (7.1/10), according to an IMDB survey. The cautionary tale aims to deglamorize the sex, drugs and rock n roll lifestyle led by the notorious rockers. It unflinchingly portrays domestic violence, drunk driving and drug addiction to a mass audience.”
Motley Crue regrouped last year to record four new songs for the soundtrack – the first to appear separately was “The Dirt (Est. 1981)” then their cover of Madonna’s “Like a Virgin” and finally “Ride With the Devil” and “Crash and Burn.”

Director Jeff Tremaine recently told UCR that he’d been full of apprehension before showing Nikki Sixx and Tommy Lee a cut of the movie for the first time. “I was really just carefully watching them through each scene,” he said.
“They both got quieter and quieter, and by the end, I looked over and Nikki had a big tear running down his eye. And I got a big hug from both of them. It was a great feeling and a great relief because it’s a big responsibility to tell somebody’s life story.”

He added he didn’t come into the project as a “super-fan, but I’m leaving it a super-fan of their music. As a filmmaker, I have to hear those songs so many goddamn times that I should be sick of them. But I’m not. I actually like them more than ever. Their music holds up.”