Refugees may soon be withdrawing their food from ATM machines 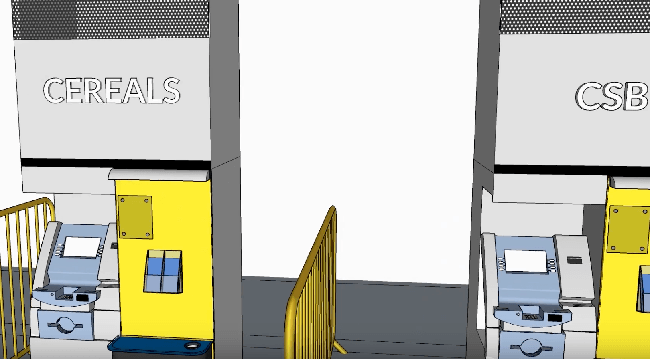 Earlier this month, the UN’s World Food Program (WFP) and World Vision International announced they will be testing food automated teller machines (ATM) in refugee camps. Like the bank ATMs, we’re used to seeing and using for cash, the Food ATM will dispense locally sourced cereals, cooking oil and other fortified blended foods with the swipe of a card.

WFP and World Vision say the machines have the potential to “revolutionize providing food to refugees” by eliminating some of the biggest problems associated with the service right now. In an email to UN Dispatch, World Vision’s East Africa Humanitarian and Emergency Affairs Director Chris Hoffman said that as the largest implementing partner with WFP, World Vision has found that at least 30 percent of food baskets given to refugees are either lost, sold or stolen. Safety concerns are also increasing as some refugees have been attacked while transporting the heavy foods they receive from distribution centers to their homes.

Then, there’s the issue of refugees being exposed to disease and sickness when food goes bad, because usually, they don’t have appropriate storage systems, like refrigerators. Additionally, because the food is usually sourced internationally and transported thousands of miles, the entire process is very costly for humanitarian agencies and organizations, not to mention environmentally hazardous.

No longer will the food need to be shipped from abroad, packaged and repackaged on-site then scooped out for the refugees waiting in long lines for their monthly rations. Instead, the Food ATM will be continuously monitored and stocked with locally procured foods, that, in turn, support the local economy and cut costs immensely. It will also allow WFP to better track what kinds of food and how much of it refugees are actually using in order to make the aid more personalized.

The Food ATM actually consists of a number of machines that each contain a specific food item (e.g. one machine for cooking oil and one machine for cereals). They will be housed in a “clean, cool warehouse” within the camp that refugees can visit whenever they want. In the warehouse, refugees can fill their shopping carts with as much or as little of each food item as they want within the limit of their pre-funded SCOPE card – a WFP digital cash card that’s re-loaded every month. The ease of access means that refugees can choose to only take as much food as they’re able to carry or store safely at home. And in much the same way that a person’s grocery shopping patterns may be difficult to predict, on-demand distribution of food assistance will make it harder for robbers to know when refugees will be collecting food.

The idea for the Food ATM was developed by WFP’s Nairobi Regional Bureau in collaboration with World Vision, and it won a slot at WFP’s Innovation Bootcamp last fall as a “game-changing” idea to tackle global hunger. Just one Food ATM is expected to improve nutrition and safe access to food assistance for thousands of refugees, while implemented at scale, it could be a global solution to food loss for hundreds of thousands of refugees.

The initial six-month pilot will be rolled out this year in Uganda and maybe South Sudan, according to Hoffman. He says that during the pilot, they will pay particular attention to whether the Food ATM is culturally accepted by refugees and implementing partners.

“This is a new idea, and many of [the refugees] have been receiving food in standard ways for many years,” says Hoffman.

For partner organizations, the efficiency of the Food ATM may dramatically cut their staffing needs and require an overhaul of policies and procedures required under the current system. Such large-scale change could become a source of contention.

But if all goes well during the pilot, World Vision and WFP plan to immediately launch five more Food ATMs by the end of 2020 and throughout East Africa over the next two funding cycles. Their end goal, according to Hoffman: to completely disrupt the food aid system.