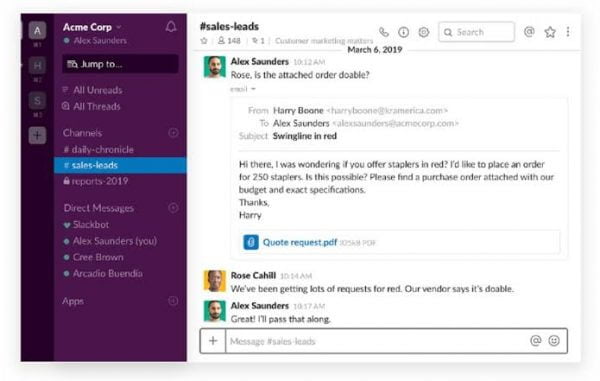 IF YOU’RE A MICROSOFT FAN that loves everything the company has ever done except Teams, then good news: all the good stuff has just arrived in Slack.

That means the kind of integration you previously got from Google connections now works with Microsoft products. Meeting invites from Outlook Calendar will now pop up, you’ll get reminders to join Skype meetings and Office documents will have full previews, rather than leaving you guessing at what wonderful mysteries lie within.

Your Slack status will now even be automatically changed based on what’s going on in your Outlook Calendar, so maybe don’t be too candid on what you’re up to at any given time if you don’t want the whole company knowing.

Do you know how you can get emails directly to Slack channels via Gmail? Well, that functionality is coming to Outlook mail too, letting you forward messages to specific Slack channels or direct messages.

Finally, OneDrive also gets parity with Dropbox and Google Drive, letting you easily share files with any channel you’re in. Sadly there’s no room for Clippy at this particular party, but you could always change your Slack profile pictures to his face as an act of solidarity to our fallen friend.

You might think that this sudden rush of integration is a result of Microsoft standing down to a better-placed rival like it did with iOS and Android, but actually the Office 365 integration has come through public APIs, without direct involvement from the company. You can’t imagine Microsoft minding too much, though: with so many businesses using Slack, this will at least stop them abandoning ship for Google Docs for the siren song of better software integration.