THE REAL CHOICE YOU MAKE WHEN YOU SUBSCRIBE TO APPLE SERVICES 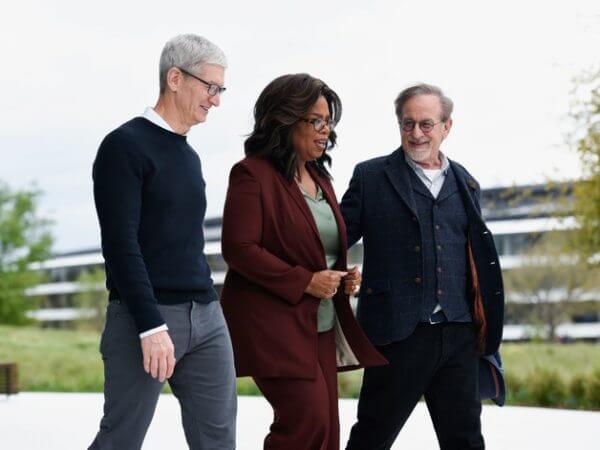 IF THERE’S ANYTHING that’s clear from Apple’s event Monday, it’s that the maker of premium tech products is trying to sell people on its vision for the future of services—a seemingly effortless lifestyle filled with always-accessible media, exclusive videogames, and cash-back incentives from a literal titanium credit card.

If there’s anything that’s not clear from the Apple event, it’s pretty much everything else. Apple’s pitch for the new era of subscription services was scant on some key details, including the pricing and ship dates of some of its new products. Company executives spoke confidently about services that aren’t launching for months; actors and directors pitched shows that had been greenlit and shot, but little footage was shown. That long lead time was another anomaly for an Apple event: Most Apple events occur just days or weeks before a product becomes available to the public, but not in this case.

The new “bundle” of subscription services also raises questions as to whether more iOS-only products are a good thing for consumers, who in recent years have moved away from expensive, often restrictive media and wireless service packages in favour of à la carte, monthly, or non-contractual services. Apple was careful to highlight all of the ways in which it’s giving consumers choice—HBO! Showtime! 300-plus magazines! two Oprah-endorsed documentaries—and touted privacy as a feature of its offerings. But clearly, the company’s push in services is designed to lock more customers into the Apple life.

THE WIRED GUIDE TO THE PHONE
Apple’s new subscription product for premium news, Apple News+, is the one thing CEO Tim Cook spoke about today that was launched immediately. It exists as a News+ tab within Apple’s current News app and will serve up a variety of magazine, newspaper, and digital-first news content. (Including WIRED; our April 2019 issue appeared in its News+ form during the event.) News+ will cost $10 a month. But no one using a non-Apple device will have access to this service, unlike how it was with Texture, where anyone with the app could access all these mags.

The pricing and exact launch dates of Apple’s other new offerings are still unknown. Apple Arcade, a new ad-free game subscription service for iOS, Mac, and Apple TV, is launching in the fall for an unknown price. Apple TV+, another ad-free subscription pitch, is also due in the fall, but again, for an unknown price. Not even Oprah Winfrey, with all of her on-stage magnetism and gusto for Apple devices, could have willed the information out of Tim Cook.

We know that Apple’s new credit card, the one physical, tangible product that was shown off, will become available sometime this summer. And we know it will be jointly issued by Apple and Goldman Sachs, with MasterCard handling the payment processing. Because Apple is able to integrate hardware with software so tightly, the card comes with sweeteners: Apple is offering 1 to 3 per cent cash-back rewards and few penalties on missed payments. And, since Apple likes to emphasize privacy, it says it won’t know what you’re buying and insisted that the controversial investment bank Goldman Sachs won’t sell your data to third parties for marketing purposes.

While we know some of the who-what-when for Apple Card, the remaining question is, why get into the credit game at all? Apple said it’s so customers can lead a “healthier financial life,” with spending tracking built right into the app, a so-noble and seemingly magnanimous statement. But non-Apple customers need not apply for that access to financial fitness, because these incentives only work if you already have an iPhone. Customer support is done via iMessage. Two per cent cashback is offered if you’re using your Apple Card with Apple Pay, which requires NFC on an iPhone. It’s designed to keep Apple Card users in the Apple ecosystem.

With Apple pitching so many subscriptions, it’s not a wild theory to think that Apple is trying its hand at an Amazon Prime-like experience or a kind of bundle for the modern-day tech consumer: Pay our monthly fee and reap the rewards across our multiple services. But analysts say that what Apple announced isn’t a media “bundle” in the traditional, cable TV sense of the word. And that may be a good thing.

Telecom and cable companies have had “very rigid contracts, and you were usually stuck for two years. Users want to choose the ‘best of breed’ for their different services, but there’s been no flexibility,” says Annette Zimmermann, vice president at the research firm Gartner. “With [subscriptions though] Apple, Netflix, and Amazon, you can cancel on a monthly basis.” That makes it easy for people to churn, she adds, but that’s a positive thing for customers too: It means the tech companies have to keep adding value on a regular basis.

Jim Nail, the principal analyst at Forrester Research, concurs with Zimmermann. It’s not really a “bundle” that Apple is offering, he says—at least, not yet—but more and more disparate subscription services through existing platforms. The more interesting part of yesterday’s event, Nail says, is Apple’s implicit message. “They’re saying, ‘We’re on your side, we’re going to protect you.’ But the tradeoff is, ‘You have to live in our ecosystem and pay the prices we charge.’” In the age of Facebook and Google, Nail says, that’s a proposition that consumers may find compelling.

But even if Apple isn’t creating something that has the perceived “bad value” of a cable bundle, that doesn’t mean its choose-what-you-eat-for-$10-a-month assemblage is a slam dunk for all media consumers. Again, these services are largely limited to Apple devices, although its revamped Apple TV app will work on Roku and Amazon devices eventually. And not all media are created equal; applying one medium’s established conventions to another doesn’t always work. It remains to be seen, for example, what people consider a fair price for touch-optimized games, let alone an all-you-can-play buffet of them.

That calculus gets even more convoluted on the TV App, where nearly every premium service mentioned—HBO, Showtime, Epix, CBS All Access, and others—is already a single button press away in your tv home screen, with all the same functionality. (Many of them already have the option of billing you through iTunes.)

Apple’s wager, of course, is that price isn’t the only consideration here. What matters is the convenience and safety of rooting yourself ever more firmly in its ecosystem. So what if your shiny Apple Card can’t rack up miles as fast point nerds’ beloved Chase Sapphire Preferred? Apple’s never going to stuff your mail slot with pre-approval letters. Who cares if you’ll never read every New Yorker that your News+ subscription gives you? It’s still right there next to Entertainment Weekly and Essence, with the added bonus of no teetering stacks of issues next to your coffee table. The illusion here isn’t value—it’s choice.

Assuming you’re on board with choosing Apple, that is.

Apple pivots as a services firm: Key announcements from the event