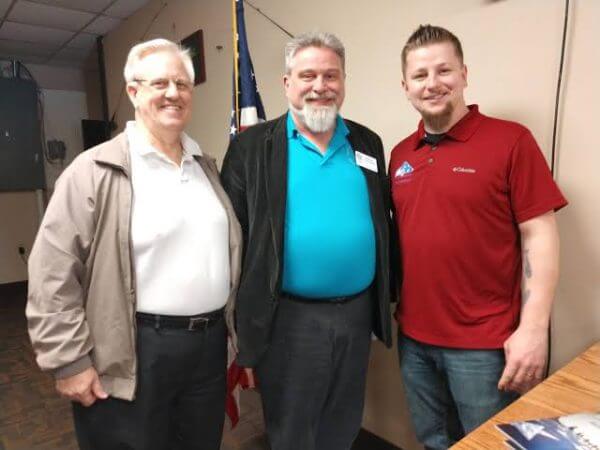 LOUDONVILLE — Benjamin Walter, veterans service officer at the Ashland County Veterans Service Office, made a presentation on the services his organization provides for veterans at the meeting of the Rotary Club of Loudonville on April 4.

Walter is new to the office, he has a lifetime of military experience, growing up as a self-described “military brat. My dad was in the Air Force for 20 years and we moved around to different bases. Then I joined the Army at age 18, was part of a special forces unit and served in Afghanistan for 13 months. I retired from the Army because of a disability — I blew out both of my knees — and was told if I ever needed help, to go to my county veterans service office for care.”

So he did, calling the office in the county he was living at the time. He didn’t hear back from the office at the time, but when he found he had a definite medical need, checked back, “only to find,” he said, “that my file, opened six years before, had never been touched. I was pretty ticked and started looking into the work of Veterans Service Offices, which led to me being hired as a veterans service officer. When that happened, I pledged to provide the best service I could — unlike the service I originally received — for the veterans I served.”

He said that dealing with the Veterans Administration can be a very complex process, and he urged people seeking to apply for veterans benefits to talk to him about it. You can call him at 419-282-4274, or email bwalter@ashlandcounty.org.

The county veterans service office is in the county office building, 110 Cottage St., Ashland. He urged people to call and set up an appointment.

Confusion about eligibility for benefits usually involves a type of service. Full eligibility is limited to full-time service (24 months of consecutive active duty service) members serving in a time of war.

“You need to provide me with a copy of your DD214 form as a start for applying for benefits,” Walter said. “National Guard and Reserve members usually do not qualify for Veterans benefits. My job is to let veterans know of services that may be available to them.”

Walter said that among the 50 United States, “Ohio is one of the best for service veterans. Since the late 19th Century, every county is required to fund and staff a Veterans Service Office, with money to do so coming from county property tax revenues.”