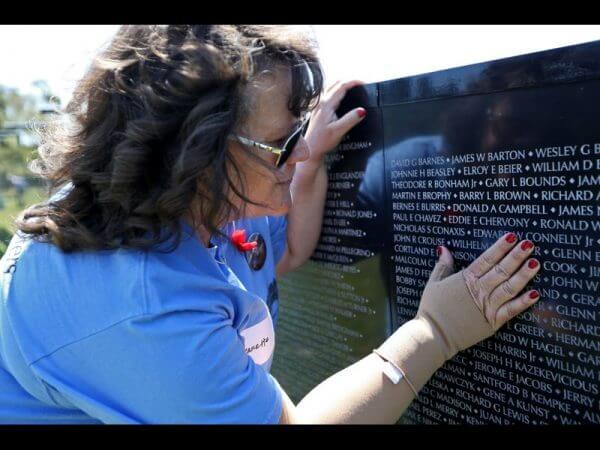 Jeanette Chervony, 52, of Costa Mesa points to her father Eddie Chervony’s name on the traveling replica of the Vietnam Veterans Memorial Wall, at Estancia Park in Costa Mesa on Wednesday. Chervony was 13 months old when her father, a member of the U.S. Army 77th Field Artillery, was killed in combat on May 5, 1968, at age 21. (Raul Roa / Staff Photographer)

On Wednesday morning, Richards, now 76, helped build a memorial wall in Costa Mesa’s Balearic Park to honor Brown and 12 other local service members who died in the Vietnam War.

“Wow, it’s touching, very touching to me,” Richards said of building the Wall That Heals, a three-quarter-scale replica of the Vietnam Veterans Memorial Wall in Washington, D.C.

About 50 volunteers from around Orange County gathered Wednesday to help build the mobile exhibit created by the Vietnam Veterans Memorial Fund. The Freedom Committee of Orange County, an organization of veterans that seeks to educate youths about military history, brought the traveling wall to Costa Mesa for $10,000.

The chevron-shaped wall is open to the public around the clock Thursday through Sunday.

In 1964, when he was 22, Richards had just snagged a promotion as a district manager at the Daily Pilot, where he started at age 14 as a newsboy throwing papers from his bicycle. The new job paid a whopping $125 a week, enough money to buy a coveted Ford station wagon.

The Army first sent him to Korea, where he did electronic warfare intelligence — listening in on radio conversations, recording Morse code and deciphering messages — as part of peace efforts between North and South Korea. He returned to the United States after nearly a year to attend Officer Candidate School. In 1967, he was shipped to Vietnam as a member of the Army Corps of Engineers.

As commanding officer of four platoons, Richards sometimes led projects for villages in Vietnam, such as building a bridge or draining a monsoon-flooded waterway. Other times, he prepared an area for another Army team, constructing makeshift barracks or, in early 1968, a fort of sorts for Brown’s Special Forces unit with 140 men, 13 dump trucks “and a lot of good luck.”

Richards, who now lives in Huntington Beach, donned a pair of yellow gloves Wednesday to help erect the panels lined with the names of fallen service members. He tears up at the mention of four of them — they were building the complex in Vietnam under his command when they were killed Feb. 15, 1968. Richards didn’t want to talk about what happened.

“My platoon leader is on a wall. He smoked cigars,” Richards said, choking up at the memory. “On panel 39 out there, you’ll see a good cigar.”

In recent years, he has tracked down the troops’ families and grave sites. Last month he found the grave of his final fallen serviceman in New York, where he plans to send flowers on Memorial Day.

“It was so healing,” Richards said.

The Wall That Heals has visited Orange County before, but this is its first time in Costa Mesa. Freedom Committee President Scott Williams, 75, another Vietnam War veteran, said the group began planning for the wall a few months ago.

“We had to do something for those that gave … so much,” Williams said, pausing to compose himself.

Jeanette Chervony, a community service specialist for the Costa Mesa Police Department, said she took a vacation day to volunteer at the wall-building. She plans to visit the memorial every night while it is in town to pay respects to her father, Eddie Chervony, who died in the war when she was 13 months old.

“To have it here and share it with the Costa Mesa community is big,” Chervony said. “What I would want people to learn is that behind every name there’s family — not just their siblings and their parents, but some of these men had wives and children and now they have grandchildren.”

Costa Mesa Councilwoman Sandy Genis volunteered Wednesday by bringing cookies and running an errand for the organizers. She said it was important for community members to remember the veterans.

“When you think of the sacrifice that was made, we have to be really, really diligent to protect what they fought for,” Genis said. “Because when we start surrendering our freedoms because it’s inconvenient or because we’re scared … we’re saying, ‘Well, why did they die?’ And it’s important to remember they died for something really important.”

More than 50 years after returning from Vietnam, Richards volunteers with the Freedom Committee and the Navy Retired Activities Office in Seal Beach. He has an Army veteran hat covered in pins, a Bronze Star for his service.